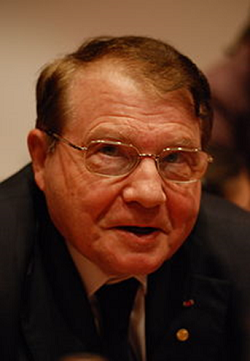 Professor Luc Montagnier graduated in both Medicine and Biological sciences at the University of Paris. At the age of 23, he became Assistant at this University. After a fruitful post-doctoral stay in two British laboratories, he spent most of his scientific carrier in two renowned French Institutions, the Institute Curie and for almost 30 years at the Institute Pasteur in Paris. Within the new Department of Virology of the latter Institute, he founded the Viral Oncology Research Unit which devoted its activities to 1) the study of cancer viruses, mostly the oncogenic retroviruses, 2) the biochemical aspects of interferon and of malignant transformation, including membrane changes in relation with the growth in soft agar, a new property of cultured malignant cells that he contributed to reveal.

In 1983, he led the team which first isolated the Human Immunodeficiency Virus /HIV1) and brought the first evidence that this virus was the causative agent of AIDS. In 1985 he also isolated the second AIDS virus, HIV2, from West African patients.

His laboratory was also the first to show that a large fraction of white blood cells of HIV-infected patients were prone to die by apoptosis, a process of programmed cell death, and to attribute its origin to the oxidative stress, possibly associated with co-infections.

Besides his involvement in the design of new types of therapeutic HIV vaccines, his current studies include diagnosis and treatment of microbial and viral factors associated with cancers, neurodegenerative and articular diseases, using innovative technologies and his research in water (DNA Waves and Water; Water Bridging Dynamics, Transduction of DNA Information through Water and Electromagnetic Waves, EM Signals and Nanostructures, Water has Memory…). As a strong advocate of preventive medicine, he is especially concerned with prolonging the active life of aging people.

Beyond his scientific interest is his deep involvement with helping developing countries to acquire knowledge of and access to modern medicine and preventive medicine. As President of the World Foundation for Aids Research and Prevention, he has co-founded two Centers for the prevention, treatment, research and diagnosis of AIDS patients in Ivory Coast and Cameroon.

Various treatment modalities are used for these multi-factorial conditions. Most of these treatments were developed from the research of Montagnier and his Chronimed associates.

Luc Montagnier was awarded many Prizes, including the following:

In 2008, he was awarded the Nobel Prize for Physiology and Medicine, for his discovery of HIV, together with Françoise Barre-Sinoussi.

He is the author or co-author of 350 scientific publications and of more than 150 patents.

1955 Bachelor of Science, Poitiers and Paris

1960-1963 Stay at the Virus Research Unit of the Medical Research Council, Carshalton, England

Since 1999 Emeritus Research Director at the C.N.R.S.

Professor at the Pasteur Institute

Since 2001 Professor Emeritus at the Institute Pasteur

Since 1993 President of the World Foundation for AIDS Research and Prevention, initiated with UNESCO (Paris)

2000 Officer of the Order of Mayo (Argentina)

2004 Winner of the National Inventors Hall of Fame (USA)

2006 Gold Medal from the Academy of Medical Sciences of Bilbao

2009 Grand Officer of the Legion of Honor (Paris)

Doctor Honoris Causa from the following Universities and Colleges:

Member of the Academy of Sciences of Madrid (1987)

Foreign member of the Royal Academy of Medicine of Belgium (1988)

Member of the French Academy of Medicine (1989),

Member of the European Academy of Molecular Biology EMBO (1990)

Member of the French Academy of Sciences (1996).

Honorary Member of the Academy of Medicine of Turin, Italy (2006)